from Scribbles to Publication

Monica Suswin has published two of the books in her series of four mini-books on creative therapeutic writing: A Fox Crossed My Path and Love & Loss (due out this spring). She very kindly wrote this piece for us about her experience writing the books and the process that led to their conception.

Writing is generous in its wisdom

(from one of many freewrites)

Fifteen years ago my writing was squeezed into short bursts of time, often on the back of envelopes. Although I’d already gained an MA in Creative Writing at Sussex University (2002), and was part of a vibrant writers’ group of poets and novelists, at home I had a teenage daughter, and elderly parents (living a couple of hours away) who were increasingly needing attention. I was an avid scribbler, but didn’t fully dare to call myself a writer.

My background wasn’t literary. In my twenties, I’d trained and practised in humanistic psychotherapy in London. Mine was a zig-zag career path interspersed with periods of serious mental illness. After being unable to work, I had to find new directions. Changing tack in my thirties, I became a secretary for BBC Radio 4 current affairs programmes, then a researcher, and later a radio producer on the Woman’s Hour team.

With this background in writing, broadcasting and psychotherapy, Lapidus became my natural home in 2003.

In the beginning I wasn’t thinking of a book at all. My scribbling was about exploring different styles and strategies to tackle the issues that mattered to me. Creatively and therapeutically. During these years my freewriting became redrafted into poems and prose. It became clear that I was writing about my own ‘lived experience’ and I also found I enjoyed explaining how the writing had gone from one stage to another. This prompted reflections and led to extending themes: on illness, dream explorations, spiritual values, relationships, friendship.

The copy for a book was forming itself. I included explanations of how the writing had been helpful. I added exercise boxes at the end of each chapter, and research led to an appendix of explanatory notes. This became an absorbing long-term project.

As I continued redrafting the material, the writing became more and more distilled in its essence. And I felt a healing inside my core-self and a heightened ownership of myself. Difficult emotions which had been released with the original writing became held in the finely tuned and edited writing as time passed. Traumatic events like my mental illnesses, or the pain about the loss of a relationship became embedded in the words chosen and no longer in my own body. I was released from old feelings and felt the writing transform how I felt about my life.

This slow and lengthy process helped me feel more integrated. Particularly in bringing together my Ill Self and my Well Self in my first book: A Fox Crossed My Path creative therapeutic writing on a depressive illness.

Like spending time with a good novel or short story, A Fox Crossed My Path leaves the reader changed, more aware of how people’s lives are, and this life in particular. For any reader, who has tried therapeutic writing and is looking for more, Monica Suswin is an experienced and very sensitive guide.

In Love & Loss, the second book about relationships, my writing transformed how I thought about love and I began to feel it as an energy in the world between me and others.

These were huge lessons I felt the writing taught me. All through this process, the writing itself evolved over time taking me on its own path. I became more and more an instrument of the writing process and its power. Trusting the unknown avenues it was taking me.

If Writing were a character, I would think of a cartographer: one that has taken charge of their own life in this book. I feel I have been on a meander around a map of his or her own making.

In the summer of 2016, I made the decision to publish independently, using Short Run Press in Exeter. I had one of those ‘aha’ moments – I saw how my writing fell into four distinct themes with the realisation I had a series of four mini-books. 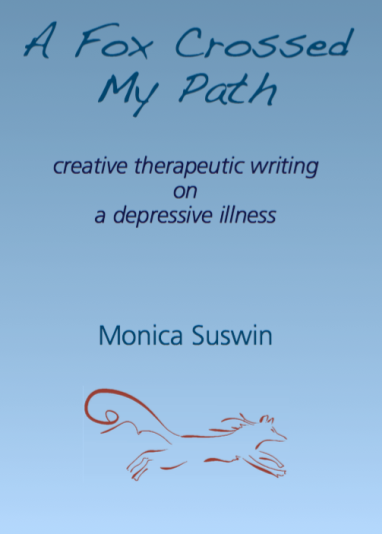 What has been surprising is that the process of independently publishing has also added to the sense of emotional integration. It's taken away all stigma of mental illness. It has enhanced the feeling of being absolutely responsible for getting my writing into the world - not from an ego-driven self, but from the perspective that this is what my writing needed to do.

The strapline for Lapidus International is Words for Wellbeing and that feels to me the purpose of the ways I have used both creative and therapeutic strategies in my writing. Helpful for me and helpful for others.

Monica Suswin is the author of a series of mini-books on Creative Therapeutic Writing, edited by Dr. Gillie Bolton. Monica has been a member of Lapidus for 15 years, her contributions are in the Jessica Kingsley Anthologies: Writing for Therapy or Personal Development Series.

Monica’s new web-site: monicasuswin.com is under construction but will be available soon!

Any opinions expressed in this article are of the author, and do not represent those of Lapidus International.

We are in Print!