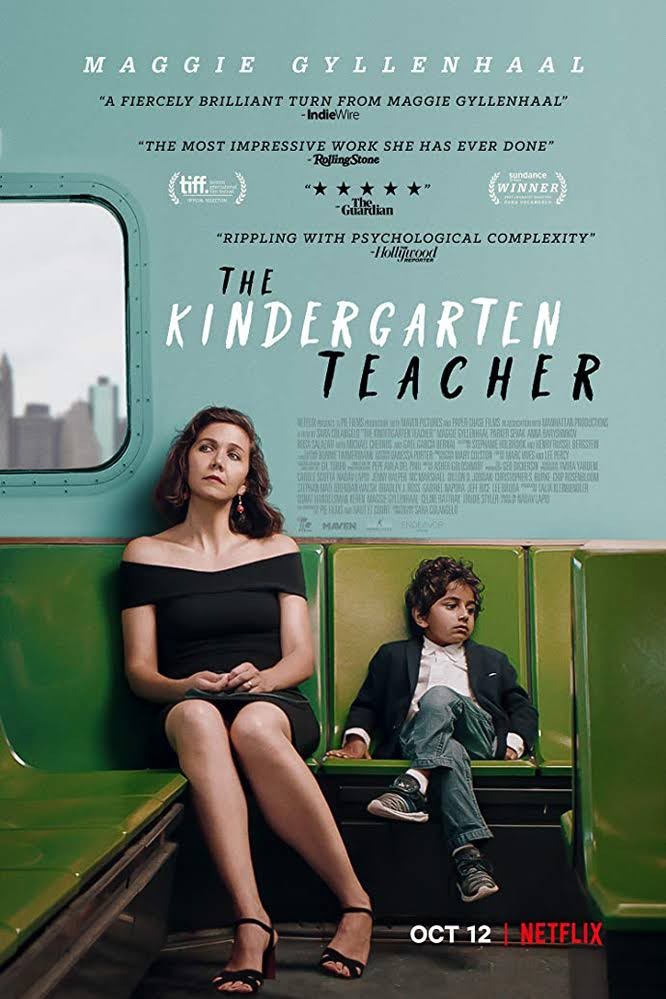 written & directed: Sara Colangelo - based on a Screenplay by Nadav Lapid

Nadav Lapid, directed a 2014 original, Haganenet. A prizewinner at Cannes. I'd very much like to see that version now. I loved this. A film made with wonderful understanding, beautifully paced, shot, acted - a gem.

Middle aged kindergarten teacher, Mrs Lisa Spinelli (Maggie Gyllenhaal), has a husband and two teenage children. She attends an adult education class on writing poetry. She seems good, practised, and caring at her job. Perhaps so good it's somewhat automatic, even when listening to care and not pushing children too far. She comes alive when playing with them, in a golden light.  In exploring poetry maybe she's reaching for something she needs. We see her write a poem as she goes to class.  But it's judged as dull. She feels snubbed. Though she doesn't work that through fully.  She may be more in tune with her class than this teacher his.

Coincidentally, one of her pupils, Jimmy, paces the floor before being picked up at the end of a day, composing a poem, though he'd not call it that, he is five and a half. The poem is a beauty (adapted from the work of Ocean Vuong). Powerful, almost 'like a message from God', as it concludes itself. (The poems throughout fit beautifully.)

And so our plot begins. Lisa sees his ability and encourages. But at the same time pursues a series of unethical actions, blurs boundaries, falls into temptations to act out her frustration. Strange developments, misunderstandings. A mess. I won't spoil it. It's not good and may end in court.

Lisa fascinates me. I see some of me in her. Not that I'd act quite like her. It's her relationship to poetry.

Young Jimmy also fascinates me (and also reminds me of me - there's poetry for you). An Ur Poet example of realness to treasure, from which comes his poetry (a link Lisa doesn't understand).  His compositions are wonderful.  He's not drawn into easy intimacy with Lisa as she objectifies him. He has her measure. Heartbreakingly we see his compassion, a moment he takes her hand, what a man.

Lisa is trapped. She has poetry and potential. We all do. I think that she's put it to one side to do some of the things she has had to in the world. To work, to be a mum. Do people sometimes do that especially thoroughly when they do feel a connection to poetry. To do things far from her poetry perhaps she coped that way. She's on automatic.

A bit like not putting God first (the divine, or her personal divine/feeling). For 'good' reasons. When she reaches for what's so natural she is offended that her practise is judged, her potential not nurtured. She's not seen. Having helped so many develop her reaction might partly be that of a tired care giver kicking off at not being given what she gives daily - possibility. A big five year old. Whilst she knows what she wants to reach for, recognises Jimmy, when thwarted she reacts in ways defined by her method for living in the world by not putting poetry first and falls into a labyrinth she's building that's out of control. Trapped in unpoetic turns.

A monster. How human, how understandable. Not respected, partly by herself. Possibility and integrity invisible. It has possible feminist readings. There's how she reacts to that invisibility. When she's seen it's male projection onto her and not her. It has my reading for care givers, but also in the modern world for any who have had to take turns away from what they love. It may resonate for some people seeking adult education. Throughout I thought of the epigraph to The Waste Land by T. S. Eliot from The Satyricon:

"With my own eyes I saw the Sybil of Cumae hanging
in a bottle; and when the boys said to her: Sybil,
what do you want?" she replied: "I want to die."

This may bring age into a gendered reading. But I might also interpret these lines broadly for all and certainly the protagonists I've mentioned, bottled. Ultimately perhaps in a jam jar. Auden's fear for what poets may do in the future seems so real.

This film is biblical in scope.

Lisa does things I do not like. But I like her. It's hard to watch what happens. If only she'd had Lapidus and the value of free expression in her writing. In some ways she is sucked in as she accepts the world as less than poetic. I would love to see a film of her journey back from this breaking point in her life. I'd love to write such a film myself.