Leslie Tate’s novel, Heaven’s Rage, describes the life and loves of an emerging cross dresser in the 1970s and 1980s. His insights have been made into a well-received short film which is currently touring the UK. Here, he describes how the raised profile of trans people has affected him as a man, and a writer. 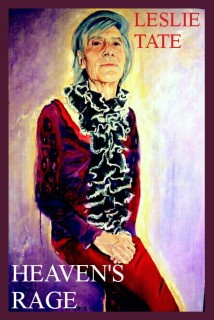 I’ve been on tour showing ‘Heaven’s Rage’, a short, independent film directed by Mark Crane based on my trans memoir of the same title. When Mark and I are in front of an audience, we show the props and the storyboard, read from the story, run the film and discuss how we changed the book into a film. Before the event we quote praise for the book from a Costa Prize judge and publicise ‘Heaven’s Rage’ being selected for ten film festivals, winning the best experimental award at the Jim Thorpe Festival. But, regardless of advance hype, the audiences on the night have enjoyed the film in their own special ways. At Watford Museum we had a large crowd asking about the film’s symbolism and characterisation, at a private cinema in NW London 30+ people questioned us enthusiastically about working together and at the St Ives Literary Festival a small, select group discussed sexual politics.

Making a book into a film can flatten the characters and reduce the story to a few key scenes. In that kind of film, the focus is external, literal and action-led. But in ‘Heaven’s Rage’ Mark Crane set out to capture the inner landscape of the book’s characters. So when he engaged Daniel Dunn, a TV child actor, to play my younger self, he asked Daniel to imitate my characteristic tics then worked with camera-and-lighting expert James Melrose to probe Daniel’s facial expressions, using extreme close-ups. Casting Daniel, a thirteen year-old self-identified gay boy, to play me gave Mark the chance to switch shots between a child in a dress and a man imprisoned in a suit. And when Mark directed my suited appearances he’d suggest a visual idea for me to think about, adding a few riddling words just before James ran the camera. The result was dreamlike and very personal, touching on the inner, reflective experience of a soul on ice.

Both film and book are outsider tales. Sometimes with me as protagonist searching for my true self in mirrors, sometimes looking back at old family photographs, and sometimes crouched in a corner imagining ghosts and devils. There’s a surreal quality to my story, tiptoeing over carpets to avoid detection, lying in bed with ‘a girl in there with me’ and leaves falling on the bedspread, or tied by bullies to a tree, cross-dressed. Mark’s film also covers my alcoholism, symbolising the dangers of drink with wire wool smouldering in a glass and illustrating how the British Press ‘outed’ me by filling up my outlined body with a collage of tabloid newspapers. 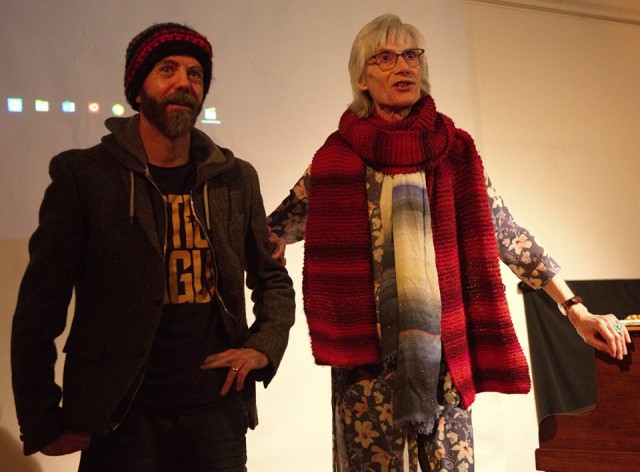 So what’s it like, as the author, to tour with a film of your book?

Firstly, there’s the strange experience of watching yourself on screen. I was told by people that my appearance was ‘charismatic’ – something I couldn’t see myself – although I came to feel the effect of being caught in the picture: a larger-than life effect similar to the selective power of writing.

Secondly, during the twelve-hour-long shoots I often compared the continuity tracking, the repeated takes and numerous shots at slightly different angles, to the endless adjustments that go into a novel. Just like the book, the film was put together in small sections (determined by weather, location and actor availability) then reassembled into an imaginative whole. That meant ticking off the finished episodes on the storyboard and ensuring that the missed-out sections fitted perfectly. It also added a random, creative aspect to the shoot, piecing things together like my sectioned memoir and opening up accidental side-tracks – all requiring further editing to fuse the bits together into a coherent whole.

Thirdly, each showing highlighted a different aspect of both book and film. So the Watford audience included Mark’s friends and several people who worked on the film, such as Sheelagh, the film’s costume designer, and two musicians, Minnie Birch and Ell Kendall, who composed the soundtrack. That made it like unveiling a group statue with figures modelled on people in the audience. What it showed was the film’s power to transform the familiar, changing songs into images and people into dream actors.

At the private cinema showing, organised by the book’s publisher TSL, I was struck by the way phrases in the book cued incidental detail in the film. And at the St Ives Lit Fest the film soon gave way to an LGBTQ discussion about how sex roles are imprinted in childhood.

So in the end book and film came together. Both follow a journey of discovery led by feeling. What Mark Crane used as a guide were the photos in the family album that open and close the film. Floating on water, they bring back the lost past. What I used in the book were inside descriptions of the craziness of childhood and the hidden passions of adulthood, all linked by sensual descriptions and the power of imagination. Central to my narrative was the attempt to capture the specialness of poetry, walking in the countryside, family history and transgression.

What unites film and book is the flow of images linking nature and the child in hiding with a sense of mortality.

So was it therapeutic? Not really. To write for an audience is more about carefully-judged effects requiring discipline and technique than emotional exposure. The balance and range is better if ‘coming to terms with things’ has happened already. What ‘Heaven’s Rage’ did do was push me to cross-dress in public, allowing people to see I’m a man wearing women’s clothes. So book and film are a statement of difference: what my wife Sue Hampton called, as the title of an event, ‘Ways to be Equally Human’. And I’m trans, still male but creative in a more fluid way (I hope) than some cis-gendered authors. For me, the purpose of writing is to widen the spectrum of possibilities.

The book Heaven's Rage is a memoir that explores addiction, cross-dressing, bullying and the hidden sides of families, discovering at their core the transformative power of words to rewire the brain and reconnect with life. You can read more/buy signed copies at https://leslietate.com/shop/heavens-rage/

The film of ‘Heaven’s Rage’ next shows at:

Leslie Tate studied Creative Writing at the University of East Anglia and has been shortlisted for the Bridport, Geoff Stevens and Wivenhoe Prizes. He’s the author of a trilogy of novels about modern love – ‘Purple’, ‘Blue’ and ‘Violet’ – as well as his trans memoir ‘Heaven’s Rage’. On his website https://www.leslietate.com/  he posts up weekly creative interviews and guest blogs showing how people use their imagination in life, in many different ways.

Mark Crane was special effects technician for Labyrinth, Superman IV, Who Framed Roger Rabbit, Nightbreed, Frankenstein and Judge Dredd. He was artistic director for Satellite Theatre as part of Watford Borough Council Theatre project in 1993 and co-director of Thin-King Productions in Brighton in 2006. Mark, who has written and directed several plays and films, started his own production company, Theatre On Wax, in 2015. https://www.theatreonwax.com/

Facebook Twitter
Tags:
book Film Article
From Me to You
Attending the National Association for Poetry Ther...

More posts from author
Thursday, 27 September 2018 Stories from the Body - a transformative journey
Sunday, 03 June 2018 From Me to You
Friday, 04 May 2018 The Hoodlums Launch Event Report

Interview with Tony Page - Secret Box: Searching for Dad in a Century of Self

A Moment of Kindness - Our Free E-book